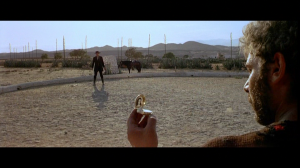 [This article contains some spoilers]

The Showdown.  As integral to the Western as hats and horses, the bat wing doors of a saloon and the piano player who stops when a stranger walks in.  For a Few Dollars More is a movie by a director fascinated by the possibilities of the showdown – two men facing one another, until one finally pulls his gun and shoots his opponent dead.

For A Few Dollars More is Sergio Leone’s equivalent of the first movement of Beethoven’s Fifth, endlessly thrashing out different variations of the same few notes until he reaches some sort of catharsis.

The middle installment of Leone’s legendary Dollars Trilogy, …More tells the story of a very bad man.  El Indio (Gian Maria Volonte) is a vicious bandit, murderer and rapist sprung from prison by his ragged, sweaty gang of desperados.

On Indio’s trail are two men, bounty hunters, with very different motives.  One is the Man with No Name (Clint Eastwood), concerned only with the price on Indio’s head.  The other is Colonel Douglas Mortimer (Lee van Cleef), linked to Indio by something other than material rewards.  Both men are in possession of a silver pocket watch, which contain a picture of the same woman, and play the same melancholy tune…

In Unforgiven, Eastwood’s aging, haunted Will Munny ruminates on killing someone: “It’s a hell of a thing, killing a man. Take away all he’s got and all he’s ever gonna have.”

Indio is a far worse antagonist.  He takes away all a man has before he kills him, and it is his relationship with Mortimer which gives the film its heart.  A Fistful of Dollars was groundbreaking and announced Leone’s arrival on the scene with his spaghetti westerns, and many critics cite The Good, The Bad and The Ugly as the superior film of the three.

I’m sticking with For a Few Dollars More, because it means something more personal, and is more moving.  Everyone has loved ones, everyone can empathize with the characters unfortunate enough to veer into Indio’s path.

Because of Indio’s fondness for starting his duels at the last chime of the watch, the question is repeatedly asked: If a bad man came along and took everything dear to you, and you had the chance to kill him, would you, could you be quick enough to take it?

Indio is a complicated character, played with such lustful, malignant intensity by Volonte.  Leone’s camera loves looking at him, with his strange blue eyes and wisp of white hair.  His goal appears to be his date with destiny, and Mortimer, rather than the vast material rewards of the film’s central set piece, the heist at El Paso.

It is clear that Indio was in love with the girl in the pocket watch portrait.  Unfortunately, in true movie psycho tradition, he skipped flowers and an invitation to dinner and went straight for the gunning down of her young husband and rape.

The other half of this relationship founded in grief is Lee van Cleef as Mortimer.  The aging colonel turned bounty hunter carries himself with extreme dignity, and is not concerned with the large sum of money offered for Indio.

The man with no name is initially perturbed to find there is another man on Indio’s trail, an older, more calculating gent with superior firepower and an even harder squint than himself.

Eastwood, well on his way to being a huge star, has relatively little to do in this movie.  He looks cool in his poncho and his battered jeans, but has little to do but referee between two men with real passion and motives.

Eastwood’s star was forged somewhere between a sheriff’s badge plucked off a lily-livered town custodian in the Dollars Trilogy and a San Francisco police badge tossed into a pond in Dirty Harry, but for most of For A Few Dollars More, he is a laconic onlooker.

Then there is Leone and his fascination with the showdown.  He plays through a series of intriguingly inventive variations on the motif, from the comic to the tragic before he finds his catharsis in the final, elegant, mournful standoff.

Firstly, consider No Name and Mortimer’s initial confrontation.  Trying to run the older man out of town, No Name sends a frightened Chinese immigrant into Mortimer’s room to pack his bags and take it “To the station”.

Out in the street, the classic location for a showdown, No Name shoots the hat off Mortimer’s head, and again as the elder tries to pick it up, until he is out of range.  Mortimer then retaliates, playing keepy-uppy with No Name’s hat with his superior artillery from a longer distance.

Later, when the two are united and riding into down, some local bad asses step out to confront them.  Rather than get into a gunfight, the two demonstrate their prowess by helping a couple of village scrumpers, shooting apples out of a tree.  A pause, and the local bad asses think better of it, and retreat.

At the other end of the scale is Indio’s fateful visit to the grass who sent him to jail.  Indio has the snitch’s wife and baby dragged outside and shot.  Close up on the snitch’s agonized, tear stained face.  Indio’s men free the victim’s hands, and the chimes play.  The newly bereaved husband and father has his chance of vengeance…

Throughout the sequence, the camera not only crash zooms on the duelist’s faces, but also flits between members of Indio’s band, registering amusement, apprehension and distaste.  They may be in allegiance with Indio, and may be murderous scum themselves, but you get the sense that none believe they are as hell bent as Indio in that moment.

Ennio Morricone’s score is indelible, not only counterpointing the action – for much of the film, it is the action.  Packed with springs sproinging, shotguns ratcheting, organs piping, horns blaring and pocket watches tinkling, it is impossible to imagine the movie being so evocative without his fine work.

Morricone’s score matches Leone’s direction stride for stride, accompanying the bawdy and grotesque moments of humour, to the drama of the operatic final showdown, where the last few moments of two men’s lives are chimed away by the relic of a long dead loved one.

Critics can have their Good, the Bad and the Ugly, or their Once Upon a Time in America.  For a Few Dollars More hits me harder at an emotional level.  It may be set 150 years ago, but it concerns a simple, heart-rending truth that anyone can relate to.  Not only my favourite western, but also one of my favourite films of all time.

Lee is an English writer, blogger and film critic living in Brno, Czech Republic. When not watching and writing about movies, he loves football, reading, eating out, and enjoying his adopted home city with his girlfriend and baby daughter.
View all posts by leerobertadams »

At the Matinée
My Filmviews