The Exorcist (1973) – The Ultimate White Hats vs Black Hats Movie…

There are few films with the diabolical aura of William Friedkin’s The Exorcist.  The story of demonic possession built its fearsome reputation during the long years of exile from videotape – while it was not included in the BBFC’s list of banned films via the Video Recordings Act 1984, it became an unofficial member of the “Video Nasty” club. BBFC censor refused to issue a home video certificate, thus depriving a generation of latchkey kids with access to their dad’s video card the joys of a head-spinning, pea-soup-puking, spider-walking little girl, and the brave priests who try to save her.

The Exorcist was adapted from William Peter Blatty’s hit novel from a few years earlier, which detailed the purportedly real exorcism of a young boy in Cottage City, Maryland, in the Forties. It begins with a virtually wordless prologue set in Iraq, where ageing priest and archaeologist Father Merrin (Max Von Sydow) is attending a dig. He discovers a small amulet resembling the head of the demon Pazazu. He confides with a colleague that he believes Pazazu will return. In the film’s key sequence, Merrin finds himself facing a statue of Pazazu across a dusty, windswept gorge.

Cut to Washington DC, in a startling contrast of culture and palette, where filmstar Chris McNeil (Ellen Burstyn) is starring in a movie. She has a loving relationship with her daughter Regan (Linda Blair), but the girl is understandably lonely – she has an imaginary friend called “Captain Howdy” and starts tinkering around with a ouija board.

Regan starts showing anti-social behaviour seemingly beyond the scope of normal pubescent girls – she swears uncontrollably and displays a superhuman strength. A sequence of invasive and now antiquated medical tests, her doctors draw a blank. After Chris’ director Burke Dennings (Jack McGowran) dies a grisly death, having fallen or being flung from Regan’s bedroom window down a flight of vertiginous steps, Chris inquires of a young priest the possibility of an exorcism.

Chris is uncertain, as she doesn’t believe in that kind of stuff, and the priest, Father Karras (Jason Miller) is suffering a crisis of faith, wracked with guilt after the death of his mother. Meanwhile, an avuncular movie-buff detective (Lee J Cobb) is sniffing around, and eventually the church sanctions the ancient ritual.

Cue The Exorcist‘s most iconic image – Father Merrin rolls up in a taxi, to the chilly tones of Mike Oldfield’s indelible theme, and stands silhouetted outside the house, spotlighted by the unholy light spilling from Regan’s bedroom window.

The performances in The Exorcist are uniformly excellent. Burstyn grounds the film as a realistic, professional single mum determined to explore every possibility in order to save her daughter. Blair is remarkable as Regan, at once disarmingly candid and fresh as a normal young girl, but completely unhinged once she has the demon makeup applied. It is telling of the film’s impact that she, like Anthony Perkins in a similarly career defining performance in Psycho, never escaped the role that made her such a huge star at the time. 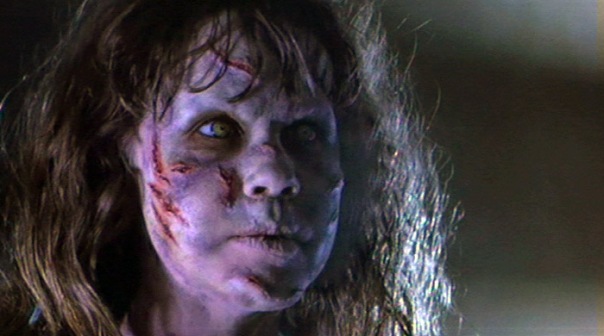 Von Sydow brings the kind of gravitas you would expect from his presence, labouring under more make-up than Blair’s demon face to transform him from an actor in his mid-forties to an elderly, weary priest.

The relatively unknown Jason Miller gives the film its true heart. Selected for the role of Karras after his Pulitzer Prize winning play That Championship Season, his Karras is a modern priest, not adverse to a drink or a smoke, and has a hands-on approach to dealing with his flock. His faith is thrown into turmoil after the death of his mother, and his piercing dark eyes speak of an irrevocable sorrow.

Other roles are filled by non-professional actors, most notably Father William O’Malley as Father Joseph Dyer, a friend of Karras who makes a critical contribution at the film’s conclusion. Friedkin, riding high after the success of his previous film, The French Connection, had a particular way of dealing with actors, and his behaviour on set of The Exorcist takes the film into Making Of… heaven.

According to the excellent mini making-of documentary Fear of God: The Making of The Exorcist, O’Malley struggled to produce the required reaction in his crucial scene at the end of the film. Friedkin responded by asking the priest if he trusted him; receiving an affirmative response, the director gave him a hearty smack around the chops. This eyebrow-raising manhandling of a clergyman elicited a believably shaky response from O’Malley.

Friedkin’s Method-style techniques extended to the other members of the cast. He reportedly fired a gun at unexpected moments to keep his actors & crew on edge – so if the characters in the film looking genuinely shat up, that’s because they probably were.

Ellen Burstyn, ever-dignified, tries to put a brave face on when recounting how Friedkin and his stunt crew used wires to pull her off her feet, but you can see that she is still pissed off, even decades later, about Friedkin used shots of her in real pain in the final cut of the movie.

These days, frosty breath is often added post-production with computers. To create a genuinely chilling atmosphere for the exorcism scenes, Friedkin used a set with air conditioning units, which plunged Regan’s bedroom to sub zero temperatures. The plumes of breath are real, and the actors are clearly in serious physical discomfort in those scenes.

When I finally managed to lay my hands on a copy of The Exorcist shortly after its eventual video release in 1999, I was a bit disappointed. It wasn’t a gloopy cavalcade of shock effects like Sam Raimi’s prohibited Evil Dead, or the sadistic cacophony of screams in Tobe Hooper’s The Texas Chainsaw Massacre. The Exorcist‘s reputation preceded it, and on first viewing I initially found it a bit slow and ponderous between the much discussed demonic set pieces. The second time around, I experienced a genuinely positive feeling towards the film, and I believe it is actually an honestly “Good” film.

Some film reviewers reacted badly to it on the initial release, with some of the more impressionable critics declaring it as “Evil”. To put it in context, The Exorcist was also the first horror film to receive a Best Picture nomination at the Oscars, and was the prototype blockbuster, with queues round the block for a wild demonic ride two years before Spielberg’s Jaws became a cultural phenonemon. Watching it again, I think the over-sensitive types got it badly wrong – declaring The Exorcist an evil film because it contains scenes of evil is a little like declaring Schindler’s List an evil film because it contains scenes of the Holocaust.

I believe it is the ultimate good guys vs bad guys movie. Its infamous “subliminal” images suggest an underlying evil burning through the fabric of the film, and the heroes are selfless underdogs. To me, it reads like a metaphysical western, with the priests as the beleagured, under-powered “white hats” riding into town to free the people (Regan) from the nasty “black hats” (the Devil and His demons). This is most evident in the famous shot of Merrin facing the statue of Pazazu in the Iraq sequence, a high noon stand-off as old as Christianity itself.

I also spoke to a Catholic friend about The Exorcist, and was surprised to hear that the film is on her church’s recommended viewing list. That seemed a bit odd at first, but then the Catholics don’t often get to be the Good Guys, either in film or in real life.

In the Fear of God documentary, O’Malley also reasons that the depiction of evil is sound and justified – while it might be difficult for viewers & critics to witness a young girl violating herself with a crucifix, or forcing her mother’s head down into her crotch screaming “Lick me!”, there’s not much better propaganda in a God vs Devil war than showing the Devil as perverted, crude and debased.

I suppose the terror inherent of The Exorcist is that God is absent, leaving the Devil to prey on mankind. The two priests, one elderly and one suffering a crisis of faith, ride to the rescue anyway, although it never seems as if God has their backs. That is also what makes The Exorcist a powerful, positive, underdog story for me – with no evidence of God’s support, they are still willing to confront the devil, and lay down their lives to save a little girl. But if the Devil exists, then so must God…

The Exorcist is also clearly a film of its time. After the idealism of the Sixties, the reality of Vietnam and Watergate came crashing in on America, and they were a nation betrayed, left high and dry by their higher power (God = Government). In that sense, The Exorcist fits neatly into that pantheon of ambivalent, downbeat, paranoid films of the time – The Conversation, The Parallax View and All the President’s Men, right down to the washed out, autumnal, East Coast colours of such movies.

The Exorcist still works. Without a higher power to trust, it emboldens us – when evil comes knocking, no matter what its form, it is down to us little humans to summon up what is good in us, and defeat it.

Lee is an English writer, blogger and film critic living in Brno, Czech Republic. When not watching and writing about movies, he loves football, reading, eating out, and enjoying his adopted home city with his girlfriend and two children.
View all posts by leerobertadams »

Horror At it's Best

The Nerds of Color

Pop Culture with a Different Perspective

Cult, B-Movies, cheesy fun films to Film Noir to classics new to me.

The Movie Guy and Friends