Missing Child (2015) – What if you were the face on the missing poster? 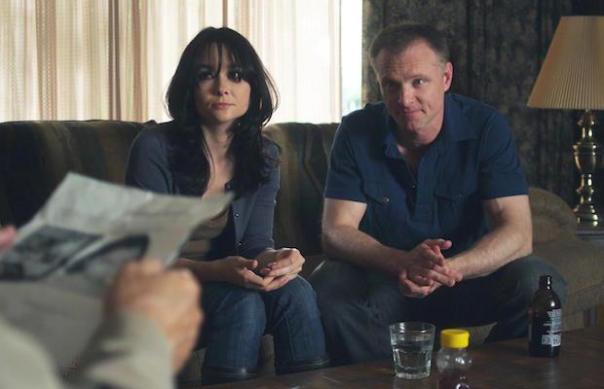 In April 2012, UK police released an age progressed photo of Madeleine McCann, the little girl who disappeared from her holiday bedroom almost six years earlier, while her parents dined nearby. The high profile case captured the imagination of the public, and the new image prompted the question – if you were abducted at a young age, and saw an image in the media that you recognised as yourself, how would you react?

Brooklyn born director Luke Sabis at least partially attempts to answer that question in his debut feature, Missing Child. There are many movies following the tribulations of parents trying to track down missing children, so approaching the sad topic from the absent person’s perspective is an interesting spin on the subject.

Gia is in a relationship with Joe (Sabis, playing his own leading man), a shady older guy, a bail bondsman who likes to keep an eye on the wanted and missing person notices. When one comes up involving a young woman of similar age and appearance to Gia, Joe encourages her to contact the parents and find out if she’s their missing daughter.

Her journey takes Gia and Joe to the doorstep of elderly widower Henry (Charles Gorgano), who posted the ad in an attempt to trace his daughter, who disappeared around twenty years earlier. Initially humble and accommodating, the story takes a sinister turn when it becomes clear Joe’s intentions are far more avaricious, and Henry isn’t as harmless as he first appears…

Missing Child starts out as a cookie cutter melodrama and morphs into something resembling a dark-hearted Coen Brothers caper, with regular people drawn into a bumbling, deadly scramble for a bag of cash. It also recalls that great Dennis Lehane adaptation, Mystic River, where the repercussions of a historic child abduction lurches violently into the present.

Once the action switches to Henry’s home, the movie is essentially a three-handed parlour piece, as the three main characters grow increasingly distrustful of each other’s motives. Of the three, Ruhlin stands out with an accomplished performance – she wears her face like a shield, constantly guarded, hinting at a lifetime of abuse and exploitation at the hands of others. In early scenes, note the slight hesitation in her reactions, as if she needs an extra half-second to assess people’s motivations before allowing herself a smile.

Gorgano is also very good, inhabiting his vast pain and loneliness with good grace before revealing his haunted history in the last act. It’s a believable, tragic portrayal of a man who will take his bad decisions to the grave.

Sabis comes off worst. An imposing screen presence with an Ed Harris leer, the screenplay – co-written by Sabis with Michael Barbuto – doesn’t give him much to work with, and he comes across as a transparently one dimensional shitheel.

Sabis maintains an atmosphere of queasy tension throughout. Perhaps the film’s standout moment is the opening sequence, a POV shot from the back seat of a car, which we later assume to be that of Gia. A man drives into what looks like an underground parking lot, and says to his prone passenger – “Are you looking forward to it?” – then stops, gets out, and climbs into the back seat. It is an ominous, unsettling intro that sets the tone for the rest of the movie.

Ultimately, Missing Child is an interesting film hamstrung by its low budget, and hints at better things to come from Sabis. For a first feature with little funds, he could have just knocked out another routine thriller that no-one would care about. Instead, he focusses on some troubling subjects and crafts an engrossing story that is clearly interested in its characters. A promising start.

Lee is an English writer, blogger and film critic living in Brno, Czech Republic. When not watching and writing about movies, he loves football, reading, eating out, and enjoying his adopted home city with his girlfriend and baby daughter.
View all posts by leerobertadams »

At the Matinée
My Filmviews