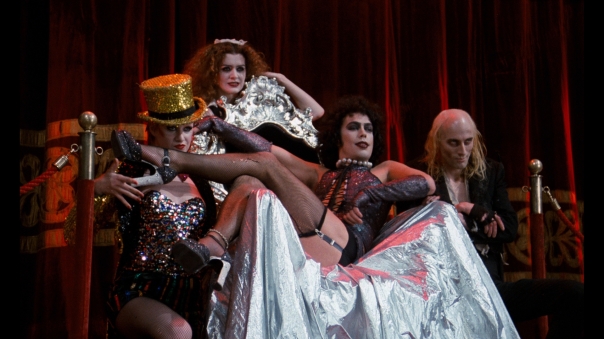 “If you’ve been itching for an opportunity to slip out in public dressed in just fishnet stockings, high heels and corset, you’ll be thrilled to hear that at Kino Scala they are showing The Rocky Horror Picture Show as part of this year’s Mezipatra Queer Film Festival. It’s an extra cause for celebration because this year marks the 40th anniversary of the cult classic.

By turn a musical, gaudy pastiche of 30s and 50s sci-fi monster movies, and creaky sex farce, Rocky originally bombed at the box office before being immediately picked up by a young, hip, counterculture crowd who turned late night screenings into a riotous exhibition of dress up, props, sing-a-longs and dancing in the aisles.

The story – for what it’s worth – concerns a young clean cut couple, Brad (Barry Bostwick) and Janet (Susan Sarandon), caught out one stormy night when their car breaks down. They stumble upon the spooky mansion of Dr Frank N Furter (Tim Curry), on a night of celebration – he is about to reveal to his “unconventional conventionalists” an amazing scientific breakthrough, namely building a musclebound blond hunk named Rocky (Peter Hinwood) for his own sexual pleasure…” to read the rest of this article, please click here (opens in new tab)

Interstellar (2014) – Christopher Nolan disappears up his own wormhole…

Interstellar is so big that it has its own gravitational pull, and time grinds to a halt while watching it…

“Christopher Nolan returns with Interstellar, one of the most hotly anticipated films of the year. It is a handsome, ambitious, sombre space epic, which is also deeply flawed and exposes Nolan’s weaknesses as a director more than any of his earlier work.

I admire Nolan as a film maker, because he makes popular, intelligent films with things to say about the human condition. His images are massive, his visions meticulously crafted and he draws expert performances from his actors. And yet…his films  lack stardust, a sense of wonder, a touch of showmanship, like a story told by an accountant, not a natural raconteur…” Click here to read my full review for Pop.junk (opens in separate window

“Alfred Hitchcock had a thing for icy blondes, and shared his kinks and fetishes with the viewer in films like Vertigo, The Birds, and Marnie. Luc Besson also likes to air his sexual preferences in his films, and the French director likes ‘em hot, young and deadly.” Click here to read the full review…


You spend a lot of time gazing into the eyes of Scarlett Johansson’s alien temptress in Under the Skin, Jonathan Glazer’s obtuse adaptation of Michael Faber’s acclaimed novel. You also spend a long time scrutinizing the expression on her face, which is usually as enigmatic as the Mona Lisa’s. If the eyes are the windows to the soul, does this creature have a soul? What is she thinking – or is she just computing? The facial expressions are like ones we use, but does she share any comparable emotions with us?

Questions such as these arise because Glazer has stripped the story to the absolute minimum. We are given almost no information about Johansson’s character Laura. In his last film, Birth,Glazer left it up to the viewer to decide exactly what had happened. In Under the Skin, he pares it down even further, so there is almost no dialogue to help us along. We’re left alone to draw our own conclusions.

END_OF_DOCUMENT_TOKEN_TO_BE_REPLACED

I was reading about clouds today, because I was trying to come up with a facetious analogy to start off my Cloud Atlas review, and to my embarrassment, I realised that I wasn’t sure how clouds form.

One type of cloud, I learned, is a convection cloud (Cumulus and Cumulonimbus clouds are brilliant examples of these – check this out –

– formed by water vapour in rising columns of hot air condensing into droplets, and ganging together to create what most people imagine when they hear the word “cloud”. )

It is also the type of cloud some people like to look at when laying around in the park, trying to spot clouds which resemble familiar shapes – an elephant, a whale, a giraffe, or perhaps Lady Gaga receiving a Grammy award.

Which brings us to Cloud Atlas, an ambitious and mercurial era-hopping sci-fi drama directed by the Wachowski siblings and Run Lola Run helmer Tom Tykwer.  Adapted from David Mitchell’s 2004 novel, the film presents itself as a high-minded epic, although like our friends the Cumulus and Cumulonimbus, is formed by lots of hot air.  Weaving six stories spanning hundreds of years, it occasionally appears to take the shape of meaningful things we recognise, buts turns out vaporous and lacking any real substance.

END_OF_DOCUMENT_TOKEN_TO_BE_REPLACED

Most critics regard Ridley Scott’s Alien  as a masterpiece, and in terms of creature design, atmosphere, performances, cinematography and direction, it’s hard to disagree.

The problem is, the deaths of Nostromo‘s crew are rubbish, bog standard slasher movie stuff.  The original Scream got a lot of mileage out of Halloween and it’s contemporaries, and Alien‘s characters make some of the worst stalk n’ slash mistakes this side of the Friday the 13th franchise.  Let’s take a look –

END_OF_DOCUMENT_TOKEN_TO_BE_REPLACED 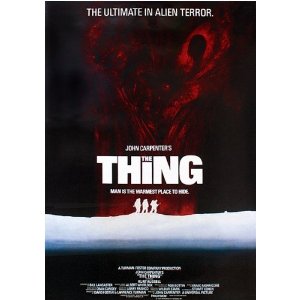 If you are reading this and haven’t seen John Carpenter’s The Thing before, let me start by saying: You lucky bastards!  You’re in for a nasty surprise.  In a good way…

And if this review persuades you to watch it, here’s a piece of advice – put the film on now.  Don’t Google search it and look at pictures.  Don’t ruin it for yourself, just watch it!

The Thing is a relentless, bleak, funny and terrifying film about a group of men stranded in an Antarctic base, battling for their lives against a hideous shape-shifting alien.

END_OF_DOCUMENT_TOKEN_TO_BE_REPLACED 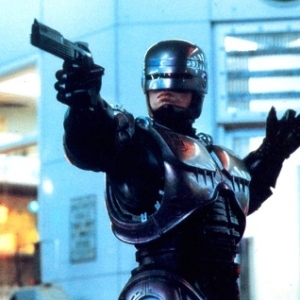 Paul Verhoven’s deliriously brutal satire Robocop was unfairly written off as a Terminator cash in, although it has very little in common with Cameron’s relentless sci-fi hit.  Notionally fitting the Sci-Fi genre, it is more like an old western, where a stranger rides into a bad-ass town and cleans things up…the hard way.

Detroit, sometime in the near future – the city is plagued by crime.  The beleaguered police force is fighting a losing battle against the ruthless villains controlling vast swathes of the city.  We meet officer Murphy (Weller) on his first day in the precinct – he is partnered with a sassy, butt-kicking Anne Lewis (Nancy Allen), who is immediately drawn to the calm, slightly arrogant new boy. Top on their agenda is notorious cop killer Clarence Boddicker (Kurtwood Smith), a snide and vicious ganglord who is running riot in the city with his cackling band of hoodlums.

Meanwhile, over at the sinister multinational corporation OCP (Omni Consumer Products), they’ve just won a contract to run the police force.  In order to do so, two rival executives are pitching high-firepower alternatives to fragile human law enforcers.  Dick Jones (Ronny Cox) unveils his crude and fatally flawed ED209, a walking gunship with a ferocious growl, in a boardroom bloodbath that is one of the movie’s standout scenes.  ED’s malfunction is both frightening and hilarious.

The murderous debacle opens the door for Robert Morton’s (Miguel Ferrer’s) brainchild, the “Robocop” programme, which is lower key than the military-style ED209, and will feature a law enforcer that is half human, half machine. All he needs is a volunteer…

Hot on the heels of Boddicker and his gang, Murphy and Lewis chase the crew to an abandoned factory, and unwisely decide to continue without back up. Our two heroes are separated, and Murphy is soon caught, tortured, and blown to bits.  Morton now has his candidate.

Murphy is resurrected as a gleaming knight in shining armor, and it’s not long before he’s cleaning up the streets in old Detroit.  However, the techies haven’t wiped Murphy’s memory properly, and he goes renegade, looking for clues to who he once was.  Robo is also back on the trail of Boddicker, who happens to have a connection with vindictive exec Dick Jones…

Robocop is extremely violent, and scenes such as Murphy’s demise are visceral enough to hit hard 25 years on.  However, the violence is undercut by Verhoven’s energetic direction, a sly and subversive sense of humor, satirical swipes at Reagan era 80’s America, and tremendous performances from actors making the most out of 2-D roles.

Standout is Weller as Murphy/Robocop.  He has only a few scenes with his full face showing, and fewer still as a living human being.  Weller maximizes on his strange, ethereal features and calm delivery, His few early scenes with Lewis establish their instant bond and get the viewer rooting for him.

Once transformed into Robocop, his performance is threefold.  He showcases some truly remarkable mime work as he creates Robo’s way of moving, with determined striding arms and jerky head movements.  Notice how his head turns first, then the body follows.  Most people who try doing the robot – apart from Peter Crouch – just look ridiculous, but Weller pulls it off brilliantly.

Then there is his monotone voice, which can be very funny. Listen to his cadence when he advises “Come with me or there may be…trouble.”. Later, the monotone becomes sad and melancholic once he discovers his former life, and realizes he can never go back.

Thirdly, is how much of an emotional performance Weller creates considering his face is covered from the nose up for the majority of the movie.  He manages to convey recognition, disbelief, confusion, anger, and sadness with just a few minor twitches of the lips. Weller gives the movie it’s emotional punch that makes it a more rewarding film than Terminator or other genre pics of the era.

Nancy Allen makes the most of her brief scenes with Murphy; Kurtwood Smith makes a deliciously sleazy villain; Ferrer and Cox enjoy themselves as the warring, greedy executives, undermining each other for the big buck.

Verhoven enjoys himself thoroughly, handling the B-movie material wonderfully, investing it with some satirical bite – the TV Adverts are delightful, particularly the “Nuke Em!” board game.

Some of the shoot ’em up sequences are rather generic, as when Robocop storms a cocaine lab. We are also treated to some wonderful moments –  Murphy’s gut-wrenching last few seconds; a POV sequence intercut with flashbacks as Murphy lays dying on a operating room table; Robocop’s visit to his old house, where flashbacks vanish as he walks through them.

Everyone has their favorite Robocop moments and quotes. Give it another visit if you haven’t seen it for a few years, because there is sure to be some detail you’ve forgotten.If you haven’t seen Robocop before, then you’re in for a treat – forget its dated look and give it a bash.

Horror At it's Best

The Nerds of Color

Pop Culture with a Different Perspective

Cult, B-Movies, cheesy fun films to Film Noir to classics new to me.

The Movie Guy and Friends